After settling down near the river Manzanares we decided to go exploring the surrounding country. First we headed towards the coasts in the south. Later we continued visiting other important settlements in the country. And we finally got our Abono, bank account and Internet connections.

We chose the city of Málaga as our first destination. Intention behind the trip in the middle of September was taking advantage of still warm weather, bathing in the sea and enjoying the sun and beaches. We took bus on on Friday and could enjoy more warmth every minute as we were approaching to Málaga. In the meantime, our friends in some parts of Slovakia could feel already negative temperatures at night. We arrived at the hostel, which was in the centre and not so expensive. The first night we went out our motto was ‘No chupitos, no fun, no dancing’, since we didn’t want to stay in bed for the half of Saturday. Well, we had some chupitos and some fun 🙂 We met a friend I knew because she had spent her Erasmus in Slovakia 2 years ago. She was really kind to show us the city on Saturday. We saw Plaza de la Constitucíon, Teatro Romano and many other things. 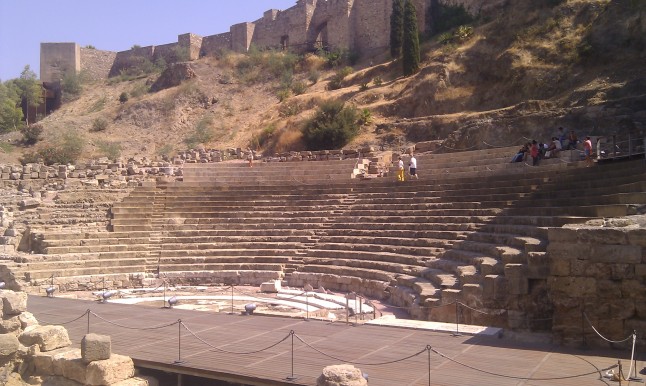 We really liked the river.

The rest of Saturday we spent on the beach.

At night we went out, had some chupitos, etc.

The whole Sunday we spent on the beach. Then we went out, had some chupitos, etc.

On Monday we planned to go to the Museum of Picasso who was born in Málaga. Unfortunately the museum was closed on Mondays. We were too disappointed. We went to see the castle instead. On the way up to the castle I took a picture of the local bullfighting arena (where poor animals are killed and the most of Spain actually dislike this tradition).

We went home and were too tired for chupitos.

Two weeks later we went to Toledo, the former capital of Spain (from the middle ages, now nobody remembers). Last week we visited Zaragoza. As many Spanish towns, its name comes from the Roman times, when it was a colony of Caesaraugusta. I liked the cathedral, bridges, squares, … There was a nice fest full of singing, dancing, fireworks and a pyramid of flowers in the middle of the square.

And did I mention, that we finally managed to get monthly cards for metro (abono), a Spanish bank account, Internet connection to the flat and even Spanish mobile numbers? Now we have all we need for the Conquista.

I'm passionate about meeting people and improving their lives with technology. I like learning languages and traveling to foreign countries. Balance and trade-off are important in everything I do.
More about me...